L.A. Guns: Still Sleazy After All These Years 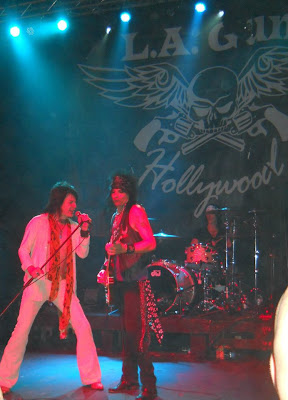 L.A. Guns burst upon the metal scene in 1988 with their self titled debut album. There were plenty of pretty boy metal bands around, but L.A. Guns were different. They were cocky and sleazy and didn’t want to fit the mold of the bands who were garnering plenty of airplay. That debut, featuring the video hits “Sex Action” and “One More Reason”, was certified gold with sales of 500,000 copies and the band had made an impact on the music scene.

1988 saw the follow up Cocked and Loaded released and it went on to be certified platinum with sales of one million copies. It also featured the bands only Top 40 hit “The Ballad of Jayne”. Their third album, Hollywood Vampires, was released in 1991 and then things started to turn sour.

Grunge started to infect the industry and that movement became the new “favorite” and it seemed as if that was the prime focus of the industry. Internal problems saw numerous personnel changes and soon the band split into two separate entities, but both using the name L.A. Guns. One version featuring founder Tracii Guns and another featuring lead singer Phil Lewis continued to tour abroad.

I was fortunate to talk to lead singer Phil Lewis before his version of L.A. Guns took the stage in Winston Salem, NC before a packed house of rabid fans.

Hey Phil, it’s awesome to be able to finally talk to you. You guys are out playing dates and showing a whole new generation of kids why you guys were the masters of sleaze rock. How’s this tour going so far?

Well, this is not really like a tour; at least not by the conventional definition of preconceived notion of what a tour is. I mean, we don’t all pack up on a bus and travel the road going from city to city. We mostly play Thursday through the weekend and then we fly back home and sleep in our own beds. I think we have become the poster boys for South Western Airlines! It’s really hard to find a decent show during the weekdays, so we focus on the weekend. With that being said, we have been having a blast. Detroit was awesome and so was Chicago, but there were a few shows in Dakota that weren’t very good. We’ve always done really well in Virginia and North Carolina, so we are glad to be coming back to play. It’s definitely been a while since we played here.

There certainly seems to be a lot of young people at your shows. I think some may be kids of parents who grew up on you guys, but a lot of them just absolutely love that era.

Oh, absolutely! That era, the 80s, was such a fun time. We were all playing dress up and guys really wanted to be in a band and the girls wanted to be with those guys! Then, grunge came along and killed it all. I mean, who still listens to grunge anymore? The young people out there don’t want to hear about all that doom and gloom. They want to have a good time!

Ok, let’s just jump right into this. I have been seeing a lot of posts when L.A. Guns dates are posted. It seems one of the first questions is ‘Which version is it? Is it Phil’s or Tracii’s?’ I have to ask because so many fans want me to ask you. Where do things stand with Tracii?

Tracii walked out on us, he quit, during a photo shoot for Waking the Dead. He left because of his side project, Brides of Destruction with Nikki Sixx of Motley Crue. Tracii seemed to think that was going to lead him to becoming the Crue’s lead singer. We decided to move forward. We recorded three more records and toured for them. The whole thing has worked for us in a way because it has created a sort of curiosity factor. We don’t want Tracii back, we are doing just fine doing things our way. I do wish him well and I wish that he would do something. His last version of the band was playing a lot of covers of Hendrix and Zeppelin material. We tend to play all L.A. Guns material; we primarily focus on the first four albums.

I have read the message boards online when it comes to you guys and the fans do prefer “Phil’s version” as they tend to call it. Your current lineup with Scott (Griffin), Stacey (Blades) and Steve (Riley) have such great chemistry together. Is there any chance of new material from you guys in the near future?

The industry is so different right now and it’s in such a state of change. There has been so much irreparable damage done and it’s ongoing. I really don’t see us putting out a new album anytime soon because it just costs so much. There’s very little money being made by selling CDs these days. It’s very hard as an artist to pour your heart and soul into making your music and then have it leak out early and people get it for free. After it does come out, you can download it for a buck or two, which is crazy. I see these bands selling a song for 89 cents and to me that comes across as a little needy and desperate. The money these days is on touring and that’s what we will focus on until the market picks up. Don’t get me wrong, we would love to release some new material, but we just can’t justify it at the moment. I am hoping that vinyl makes a re-emerge and it looks like it slowly is. There is a whole generation who has missed out on that. Vinyl was such an experience.

I can totally relate to that! There was a smell to vinyl and to have that big piece of art in your hands. It was not uncommon to spend hours in a great record store discovering things.

Exactly! That is lost on the youth of today. They can download an album to an MP3 and there is no cover, no liner notes, no artwork, nothing but the music. They are missing the total experience.

So, with all of these changes in the industry, how do you keep motivated and focused after doing this for over 20 years?

Well, all I know is that we have a great band right now and we’re having a blast. The audience loves it and the turnout at our shows keeps growing. That’s inspiring to us. We are seeing two generations and sometimes even three at our shows! I love traveling with these guys too. You can call it what you want. Call it hair metal, sleaze rock, cock rock, whatever, but you have to have a sense of humor about it. I mean, we’re not trying to be Phish out there. The day that it stops being fun, that’s when I will call it quits.

I have two quick questions from the fans if you don’t mind. The first pertains to your classic power ballad and one of my all time favorite songs ‘The Ballad of Jayne’. If you look it up online and research it to see who it is about, on sites such as Songfacts.com, you will see that most people say it’s about Jayne Mansfield. I don’t think it is at all. Can you clear this up?

That’s silly; it’s not about her at all. It’s about a fictitious character, but I based it on so many of these young girls who leave their small towns and go out to LA to become a star. I went into a coffee shop and up on the wall were all of these 8x10 headshots of people who you have no idea who they are. They all came in there with their bags packed and a dream of making it big. For most of them, it didn’t work out. That’s what the song is really about. I did re-write the lyrics a bit after our friend Jani Lane passed away and played it at a few shows in his honor. I called it ‘The Ballad of Lane’.

One last question, do you have any guilty pleasures that would surprise even you most hardcore fans?

Well, I guess it would be that I like going to cat shows. I just recently rode my bike down to Santa Monica and went to one. There are all sorts of types of cats there and cat toys. The people there are pretty great too. I had a great time there.

So, when it’s all said and done, what do you want people to look back and remember you for?

I was a working class kid who came from nothing and made it. I had no musical background and I made something of myself in the music business. I don’t have a big mansion or a fancy car because I don’t care about all of that. I’m the real deal.

This is awesome. So cool you got to interview Phil! I freaking love L.A. Guns. Last year on a trip to L.A., they just happened to be playing a Saturday night show at the Whisky a Go Go. Of course I went. And bought a shirt. Only a few other bands could be more perfect for my first show at the Whisky.

Want To Increase Your ClickBank Banner Commissions And Traffic?